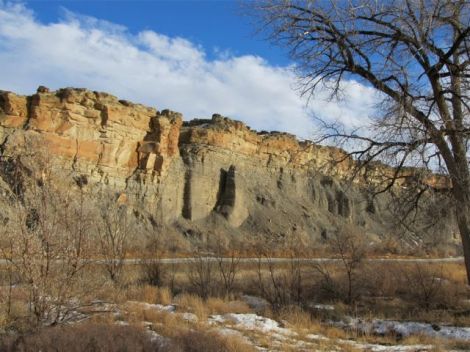 I’ve looked at clouds from both sides now. From up and down, and still somehow. It’s clouds illusions I recall. I really don’t know clouds at all. — Joni Mitchell

With my head in the clouds, that’s where Interstitial: Between Earth and Sky began.  It’s a bit convoluted, this story.  But that’s how my cycles of creativity work.  I like piecing it together here in this blog.

For the past few years, I’ve been using hot glue as sculptural media to create imaginary landscapes evoking the textures of water and ice.  Unexpectedly, my gaze shifted from land to sky during artist residencies at Jentel and Brush Creek Ranch in 2011.  Different parts of the state, different times of the year, different encounters with clouds. 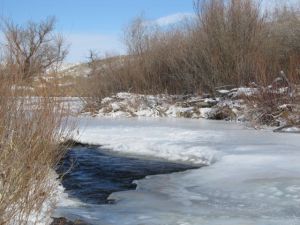 In February at Jentel, I was exploring freeze-thaw cycles along Piney Creek, which flows through the 1,000-acre ranch. For days, I trudged through bramble-tangled snow to park myself at creek’s edge to watch ice melt. I came to relish the quiet, the intimacy; it was though I was feeling the Earth’s heart beat.

I know what you’re thinking.  As fascinating as watching grass grow, right?  But no, seeing the tiny bubbles percolating and gurgling under the icy crust, nearly imperceptible changes in consistency between water and ice—it was magical!

Click to see a tiny bit of video of SPRING THAW 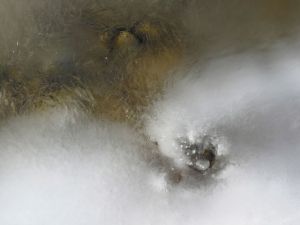 That’s when the word “interstitial” came out of nowhere, as I thought about spaces between water and melting ice, the blurry line that separates them.  When does one become the other?

Back in my Jentel studio, I tried capture the essence of those fuzzy, flowing melt lines in drawings and monoprints.  How, I wondered?  They’re barely there, so wiggly, so elusive. It was awkward and clumsy, sort of like trying to catch butterflies or fireflies.

Halfway through my residency, I visited the University of Wyoming Art Museum to attend the opening reception of NACHI: Between the Eternal and the Ephemeral created by Seattle-based artist, Etsuko Ichikawa.  Also—to visit with the curator about a possible exhibit.

Driving back to Jentel the next day, clouds got in my way.  Literally!  I watched a long spear-headed cloud emerge without warning over the Laramie Mountains. It was going to be awful, I knew, and it was. Within 15 minutes, ferocious winds and wet snow transformed Interstate 25 into a terrifying nightmare of black ice, the most hazardous driving ever!

As it turns out, this encounter opened new fresh artistic territory.  I began asking myself questions about the chemistry of clouds. How does their composition change, minutely or monumentally, slowing or rapidly (as was the nasty cloud that put me and my car in the ditch), depending on the weather that shapes them.

I’m stopping here for the night, too sleepy.  Tomorrow, Part II of Cloud’s Illusions.  ‘Twil be good way to end the day after standing on the lift in the midst of clouds.