Working on Interstitial straight through without a lunch break got old.  After my first week at the University of Wyoming Art Museum, I discovered more work gets done, better, faster, after a refresher. Besides, there were five exhibitions vying for my attention. I’d be crazy not to partake, I told myself.  The Papua New Guinea exhibit was my first post about University of Wyoming Art Museum exhibits that I saw while visiting campus.  Here’s another.

Since arriving in Laramie, I’d kept my eye on an exquisite piece by Ursula von Rydingsvard.  In full view of the lobby windows, Doolin Doolin beaconed from the  sculpture terrace.  I found myself taking short breaks, getting up close and personal to the undulating form of western red cedar.

Like most of her other work, von Rydingsvard created this work by glueing and doweling standard four-by-four-inch beams into massive columnar grids.  Then, she uses hand chisels and mallets to shape the wood into hulking forms rutted with craggy textures.

The surface striations called to mind geological formations folded into the scarred bones of this state that I have come to love. Both raw and soft, the piece suggested the wear and tear of deep time, as though something that once lived, still lives.

The sculptor was one of several artists invited as presenter in 2008 for the public art symposium which the University of Wyoming Art Museum hosted to celebrate the kick-off the Wyoming Sculpture Invitational.

I know it’s presumptuous, but I can’t help pointing out a couple things that von Rydingsvard and I have in common. Daughter of a peasant woodcutter, she fled with her family from Germany in 1938, living the first year years of her life in refugee camps, before emigrating to the United States in 1950—the year I was born.  A special year for both of us.

We share the December 2010 issue of Sculpture magazine, too. I am featured with a paragraph and photograph  of my 2009 installation at Suyama Space in Seattle (p.20).  Her three-pager highlights a 35-year retrospective exhibit at New York’s LeLong Gallery (p. 30-32). 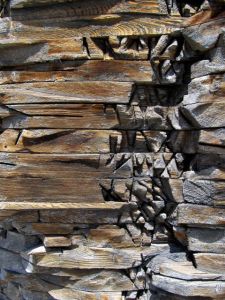 The writer introduced her article about von Rydingsvard’s work this way … “Her new work writhes, twists, leaps and otherwise moves in ways that wood has never moved before.  Wedges, knobs, teeth and other details suggest fabric or bodies in space.”

Her gridded format was influenced by minimalist sculptors like Sol LeWitt and Donald Judd. Yet she’s often described as “postminimialist.” Rather than industrial materials, she favored serial repetition of natural materials, and like Eva Hesse, her repeated forms were softened by her intuitive process of sculpting.

Over the years, the internationally-acclaimed sculptor has exhibited at the Whitney Museum of American Art; the CAPP Street Project, San Francisco; the Denver Art Museum; and Center for Contemporary Art, Warsaw, Poland, to name a few. Among the major collections that include her work are The Metropolitan Museum of Art, The Brooklyn Museum, and the Walker Art Center in Minneapolis. Her outdoor work has been installed at the Minneapolis Sculpture Garden; the Storm King Art Center, Mountainville, NY; and the Laumeier Sculpture Park in Saint Louis, among others.