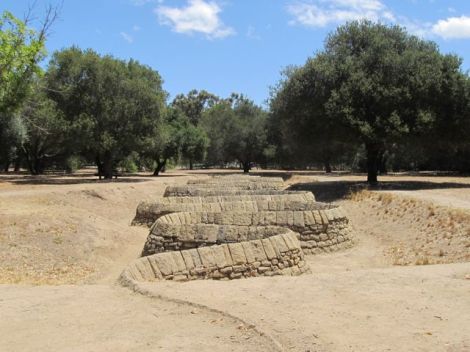 Surprise, surprise.  Andy Goldsworthy at the Cantor Art Center at Stanford University. I couldn’t believe my luck. I’ve long been a fan of his work, but this is the first time I’ve seen one of his earthworks.  I’ve only seen photographs and a crumbling wall of white clay in a Chelsea gallery a few years back.

(See my previous post about Richard Serra’s Sequence that I also found at the Cantor Art Center.)

Stone River is constructed using limestone recovered from Stanford buildings that collapsed during 1906 / 1989 earthquakes. The artist’s goal was to blend the natural and man-made, the idea of stone quarry and building. Set into an excavated trough, it fuses with the earth like a curved spine. The land will reclaim the work as it falls into disarray over the years.

Which speaks ever so poetically about the transitory nature of everything, alive or not. What better form than serpentine? It speaks poetically to me of how life sheds its existence. Like a snake shedding its skin to begin again fresh, changed, then again the same?

His words, only his words, will suffice:

I describe the form as a river and prefer it not to be referred to as a snake. It is not a river either, but in calling it one, I hope to touch on the movement associated with a river. A river to me is not bound to water. It is the flow, not the water, that is important—a river of wind, animals, birds, insects, people, seasons, climate, stone, earth, color …

And yet, when I see a snake, I am fascinated by its form and movement … It is the essence of line, movement, and form. The effortless way in which [it] travels, reveals an acute feeling and understanding of [its] surroundings. The perfect sculpture.