I’ve been thinking about the two miles of unraveled twine I used to create my BFA exhibit in 2007. After graduating, I continued using the unraveled fibers for installations in the spring of 2008 at the Prichard Art Gallery at the University of Idaho and at the Sun Valley Center for the Arts. 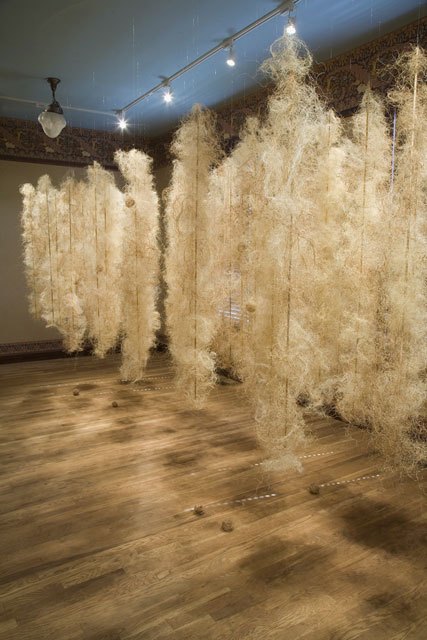 During that time, I realized I was unraveling twine as a personal narrative of deconstruction. It’s my life, I thought one day—I’m trying to decode the script of my life: the unruly knots, the tangling of all that I believed to be true, all that I held dear, most of which had disappeared.

The experience reminded me of a character in One Hundred Years of Solitude by Gabriel Garcia Marquez. At the end of the book, a young man tries to understand a strange parchment, only to discover it reveals the story of his entire life—the last remaining member of his tribal village.  This is how I came to embrace fiber as being intrinsically suited to referencing time as a undulating continuum.

I recall how the twine fibers seemed animated by the unraveling.  But while they could shaped to shaped into new form, there’s no way they could be returned to their original form as a tight line of twine. Not unlike humans:  A mind once stretched by a new idea never regains its original dimension. (Oliver Wendell Holmes, Supreme Court Justice 1902 to 1932).